At the 21. European company sports games in Salzburg, Austria from 26. to 30. June 2019, the BSV Fritz Völkel, the company soccer sports team of the KSM Castings Group, became European Champion for the 2nd. time.

The soccer team really deserved this title: Already in the first round, the team with Coach Norbert Brisch was number one in their group with 17:8 and 12 points. The success curve was consequently followed in the round of sixteen and quarterfinal matches. In the semi-final, the team was shooting itself into the final with a 6:5 against the team of Croatia Osiguranje. Then they played against the Julius Fritsche GmbH from Austria and finally won the thrilling match with 5:4.

The joy in the faces of players and coach can still be seen. “This was our fourth participation in the European Championships for Company Sports and we got the title for the second time, a really great performance”, said Brisch. Since its foundation, the BSV Fritz Völkel has already won 60 titles, e.g. four times the German Championship. “Many people are involved in the success of the team”, stated Brisch. „Previous players, plant and company management and owner and, of course, the players themselves with their motivation and ambition.”

In 2019, more than 7000 athletes from 22 countries participated in the European Championship for Company Sports in Salzburg. 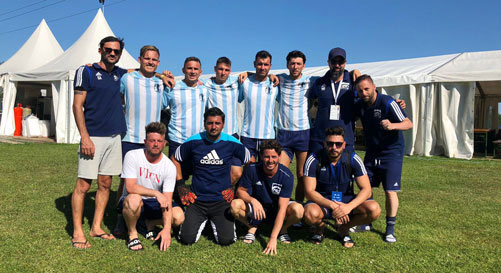 KSM operates nine production plants in Germany, Czech Republic, USA and China with a total of approximately 3,500 employees. Among its customers are the major automotive producers and automotive suppliers like Volkswagen, Daimler AG, ZF, Benteler and Bosch. In 2018, the company group achieved a turnover of approximately 539 million EUR.