Generous support for the KSM soccer team from Wuppertal

Mr. Wang Jiong, Vice-chairman and President of the CITIC Group Corporation, paid tribute to the BSV Fritz Völkel 03 for the great sporting performance of the team. To underline his words, Wang handed over a cheque worth 5.000 € to the company soccer team from Wuppertal.

The Chinese owner did not miss out on presenting the award personally. At the same time, the six-member delegation from China used the visit for a tour of both sites in Wuppertal and Radevormwald.

During the handing of the cheque, Mr. Wang Jiong found many appreciating words for the great performance of the team of Norbert Brisch and stressed the importance of team spirit and solidarity for the company. His praise also included both sites of the KSM Castings Group in North Rhine Westphalia as such because „he was very content with what he saw“. „To unite a group of people, show a common path forward and pursue a common goal is the key to success in many cases“, confirmed Vicente Perez-Lucerga, CEO of the KSM Castings Group. Of course, both team and coach were very happy to receive this appreciation from the Chinese owner of the KSM Castings Group.

BSV Fritz Völkel 03 was already founded in 2003. At present, the team is made up of about 35 employees from almost all departments and classes of age of the plant in Wuppertal. Since 2006 Norbert Brisch is team coach. The team has about 50 matches per year with continuous success. In 2018 it became indoor soccer champion for a record 4th time. If Brisch is asked for the most impressive event in the history of the team, the answer is clear: “The visit to China in 2014, the 1:1 against the Chinese team was a great event”. But once is nothing at all so this event shall be repeated soon – upon invitation of Mr. Wang. 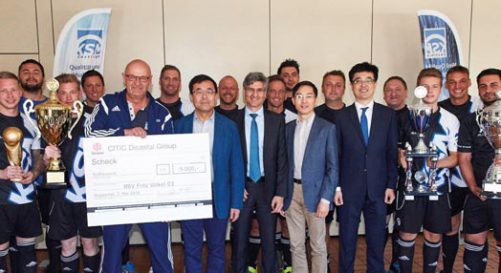 KSM operates 9 production plants in Germany, Czech Republic, USA and China with a total of approximately 3,600 employees. Among its customers are the major automotive producers and automotive suppliers like Volkswagen, Daimler, ZF, Benteler and Bosch. In 2017, the company group achieved a turnover of approximately 564 million EUR.