At the 21st company sport championship in Neunkirchen Wellesweiler on 25. January, the company soccer team of the KSM Castings Group BSV Fritz Völkel has become indoor soccer champion for the 6th time.

The organization of the event by the SSV Wellesweiler as well as the whole hall management went like clockwork. The referees easily handled the games. Besides – best and most important especially at company sports – there were no injuries.

During the award ceremony, Paul Georg, President of the SBSV, Prof. Dr. Jörg Lothdem, Head of the IKK Südwest, Horst Nesselberger, chairman of the SSV Wellesweiler and SBSV Vice president Ralf Weis expressed their gratitude for the voluntary involvement of all participants.

In this year’s championship, 202 goals were scored in 23 games. 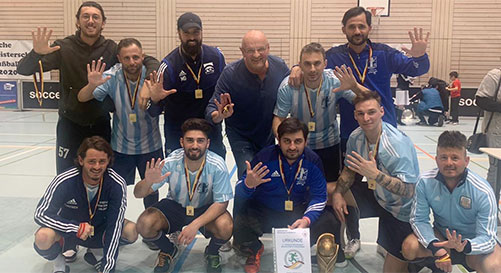 KSM operates nine production plants in Germany, Czech Republic, USA and China with a total of approximately 3,550 employees. Among its customers are the major automotive producers and automotive suppliers like Volkswagen, Daimler AG, ZF, Benteler and Bosch. In 2019, the company group achieved a turnover of approximately 525 million EUR.